Acustica Audio Nebula. Nebula3 Pro is Acustica Audio's showcase product offering the full power of their proprietary audio processing technology, based on Vectorial Volterra Kernels. It can be run using the latest CUDA processing techniques, relieving the strain on your CPU. Nebula is a multi-effect plug-in that is able to emulate and replicate several types of expensive audio equipment, eliminating the need for.

Acustica Audio has developed a truly unique plug-in that is capable of emulating numerous types of audio equipment; ranging from equalisers, filters, microphones, preamps, compressors, and reverbs. Acustica However states the list of the types of emulatable equipment is considerably larger than the aforementioned listing. Nebula2 is capable of replicating anything from generic time-variant processors and effects such as flangers, phasers, through to choruses.

Nebula arrives with a 6GB convolution library emulating several hundred items of vintage gear such as preamps, tape machines, compressors and chorus/flanging effects along with the more usual equalizers, filters and reverbs

Nebula captures the dynamics of non-linear devices such as compressors, but also ‘time-variant’ processors such as chorus, flangers and phasers. Apparently, non-linear convolution was only available on hardware products such as Focusrite’s Liquid Mix, while, time-variant devices have never before been captured using this method.

Nebula’s convolution technique is based on ‘Diagonal Volterra Kernels’; in effect, tiny instantaneous snapshots of real-world effects. It processes lots of these kernels at once, and then, rather like a wavetable synth, can scroll through an array of slightly different waveforms to morph them, using a ‘vector engine’ controlled by LFOs, envelopes and so on. For instance, by mapping the input level of the signal to the position in the kernel array, you can reproduce level-dependent processes such as compression or distortion, while scrolling backwards and forwards through a kernel array using an LFO reproduces cyclic sounds such as chorusing and flanging.

It could be possible to have just about any high-end equipment you’ve dreamt of within your DAW.

Now im no tech head but im assuming they run their convolution technique through say – a Neve 1073 – and after some sort of code writing etc a new highly usable Neve 1073 patch is available as a piece of software goodness within Nebulas interface. Now i know companies such as UAD and Waves have been emulating high end gear for a long while now, but in my eyes haven’t got the versatility of the Nebula and they charge a packet. Quantity vs. quality I may hear you say though? This is a new method of re creating the essence of a piece of hardware and may be just as good if not better. Nebula 3 which was PC only (now with Nebula 4 for Mac) coming soon is only 80 euro which includes 60 pre amps, 40 equalizers, 15 compressors, 20 Tapes, 30 Filters, 100 Reverbs, and 80 TMV effects; chorus, flanger etc. The option does sound very sweet. You can apparently emulate ‘your’ own gear to create a custom Nebula!!

As augmentation to your purchase Acustica hosts ‘Nebula-programs.com’ a community for sharing user sampled Nebula programs which his sounds like alot of fun to me! I’ll upload my Rode NT2A and download a Neumann u87! At a very quick glance on the Nebula-Programs site I viewed an API 550b EQ and an API, but im telling you there are hundreds of unique, vintage and plain good sounding emulations in there.

So 1 single multi-effect plug in that comes packed with 6gb standard and the ability to emulate anything from your own bedroom gear to a rack full of vintage gear. And then being able to share with other users….a patch database that is in constant flux is a nice little extra for me as im never satisfied!

Now the Nebula has been a Win only product until now. With the streaming demand from Mac users and rightfully so, the team at Acustica Audio have taken upon a new endeavor to get out an Audio Unit ‘soon’ but with no immediate release date. My personal guess is around Nov-Dec judging by their progress via The Acustica thread.

I will DEFINITELY be purchasing as soon as it is available!!!!

You can check out the manufacturers site;

Or the official ‘thread’ – Nebula on MAC OSX 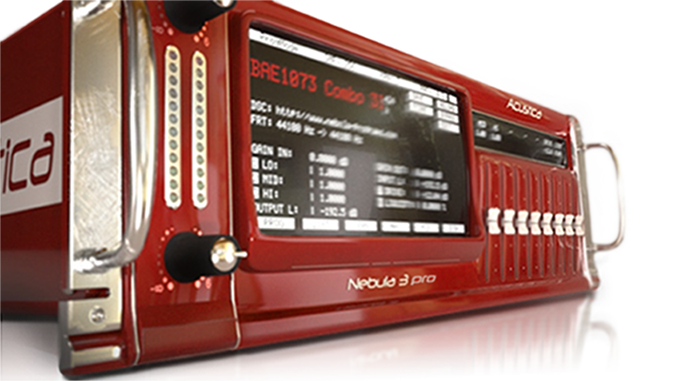